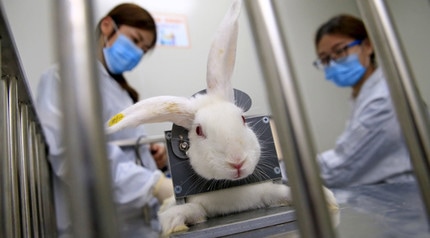 Rabbits are commonly used for testing.
Animal testing has allowed us to expand the medical science not only in our country, but globally. These methods of testing have lead to less death and disease, and has especially helped to advance medicine in the 20th century. Animal testing has contributed to our medical advancements, but some question the effect it has on the animals. Many people within our country are against animal testing because they believe that it causes unnecessary and cruel harm to animals, and because animals usually have different reactions than humans to the products.
​
When testing animals, scientists test for toxicity of substances, as well as different durations of exposure to the chemicals. The intent is to find out the probability of a substance being harmful, as well as the extent of its damage and how much exposure it takes to become damaging. There are different methods to testing for these effects: eye drops can be administered to test for eye irritation, areas can be shaved to test the abrasiveness of adhesives or chemicals, chemicals can be given orally to test the effects of ingestion, and so on. These processes have the potential to be harmful and stressful to the animals, and animals can be euthanized after testing if the effects are that adverse.

Opponents of animal testing have many concerns that typically surround the ethical implications, but they’re also rooted in the effectiveness and costs of such testing. It’s important to note that testing animals does not completely bypass human testing. Given that animal testing isn’t perfect, very few drugs that pass animal testing pass human testing. The Food and Drug Administration said that 92 percent of all drugs that are shown to be safe and effective in animal tests fail in human trials, and of the small percentage of drugs approved for human use, half end up being relabeled because of side effects that were not identified in tests on animals. Animals also don’t get many of the diseases that people do, such as certain cancers, HIV, and heart diseases. Signs of these diseases are artificially induced in animals in attempt to mimic human disease, but there’s many variables--like genetics and psychological issues--that such testing can’t account for. Additionally, many animals don’t react to chemicals the same way humans do. For example, aspirin is toxic to many animals and would not be on our shelves if it had been tested according to current animal testing standards. Medicine that is beneficial and safe to humans could be deadly to animals we test these drugs on, so it’s worried that many drugs that have been tested recently could falsely be considered harmful. Conversely, tests that are deemed safe could turn out to be fatal once they get to humans.

There’s also tens of thousands of chemicals currently in use in the United States. Billions of dollars are spent on studies to protect living beings from being harmed by these chemicals, but such animal testing is also time-consuming. According to the Humane Society International, evaluating a single pesticide chemical by testing on rodents can take as long as 5 years. Of all of these tests, despite the use of over 115 million animals globally each year, on average only 25 new medicines are approved annually by the FDA, many of which are for rare diseases. This raises alarms for people against animal testing, begging the question on whether funding for these tests is being used appropriately and efficiently. Additionally, with low passing rates of tests, many believe this is unnecessary suffering and sacrifice for the animals involved. 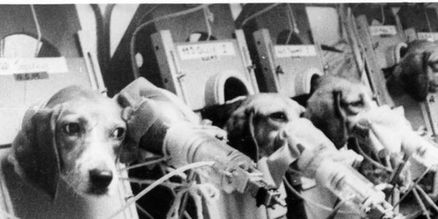 Pictured, beagles are being used to test the effects of inhaling cigarette smoke. In 1975 an undercover reporter exposed these practices in a cigarette company that claimed to be cruelty-free.
​Others believe that the benefits of animal testing are far too significant to be ignored. Animal testing has been around for centuries, and thus has almost become a tradition in the science world, making it familiar and more trusted than new alternative methods that have not been practiced for very long. Many scientists continue to rely on data from animal experiments mainly because that is what tradition and current laws dictate. This implies that scientists are more comfortable using animal testing because it has been proven effective, and because of the regulations in place, scientists feel more confident that animal testing is safer than it appears to be. Scientists are more inclined to use and trust tests that have been around for longer, which typically involve animals. Without enough time for new methods to be properly established and tested, it is not likely that a drastic change in methodology will occur.

Cancer has become far too common in our world, and through animal testing medical advancements have been made that allow cancer victims to live longer than they would have without said testing. Herceptin--a humanised mouse protein--has helped to increase the survival rate of those with breast cancer, and it’s said that it could not have been attained without animal research in mice. It is also said to have helped develop modern vaccines including those against Polio, TB, Meningitis and, recently, HPV. Modern anesthetics, the tetanus vaccine, penicillin and insulin have also been said to have relied on animal testing to develop. Although there is debate on the truth of such, it is important to consider the history of medical victories that could have spurred from animal testing, and might not have occurred if animal testing wasn’t used.

Supporters also feel that animals have similar body structures to those of humans, and therefore provide an accurate representation of the effects on humans. We share 95% of our genes with a mouse, for example, making them an effective model for the human body. Plus, animals and humans have similar organ systems performing the same tasks in more or less the same way. The similar body structures between specific animals and humans explains why certain animals are used in animal testing, as opposed to others. Testing on these similar bodies allows for scientists to work with something close to human structure in a more controlled environment.

It is also important to note that these tests have set the foundation for products that are “cruelty free”. Those companies know to avoid the harsh chemicals thanks to animal testing that has taken place independently from their companies. While the companies are unsupportive of animal testing, they continuously use the findings from animal testing to develop new products.

Progress for alternative methods has been slow, as scientists can only pursue work where funding is available. In vitro test methods are based on human cells and tissues that are grown in a lab, and are often cheaper, quicker, and more reliable. There are also in silico tests, which are computer-based models, that work to reduce early testing, and tests called refinements, to make testing less painful and stressful for animals. In order for new methods to be suitable for regulatory testing, more funding for testing processes is necessary. Supporters of animal testing imply that we can not remove animal testing completely, but that alternative methods will work to better animal testing. Using these alternative methods alongside animal testing could potentially reduce the risk to animals, as well as require less animals to begin with. If they can get better results quicker by combining methods, then total loss of life and time to get results would decrease. Opponents hope that such methods could eliminate, or at least greatly reduce, animals being used for testing. While non-­animal methods play an important part in research, they cannot replace all use of animals. These alternative methods can be used to complement data from animal models and enhance animal studies rather than rid of them altogether.

Despite the development of new methods of testing, the use of animals for testing still remains present. Supporters believe that alternative methods need additional time to be proven effective, and given the similarities between animals and humans, the successes already seen, and the the traditions associated with animal testing, scientists find it hard to reasonably abandon such a routine. On the other hand, opponents of animal testing believe that the imperfections, expansive wastes, and unethical treatment of animals are far greater reasons to end animal testing, rather than continue the centuries old tradition. ​

Supporters of animal testing argue that established methods are the most reliable ways to test products, while opponents claim that they cause unnecessary harm to animals and that alternative methods should be used. What do you think the role of animal testing should be within health and beauty industries? Respond in the comment section below or on Twitter using the hashtag #RONow17Animals
Banner image courtesy of ProCon.org
May 2017